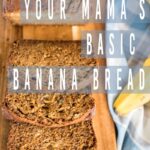 This banana bread recipe is originally from Flour Bakery in Boston, MA. It’s an award winning recipe for good reason! This is not your mama’s basic banana bread but the most moist, flavorful and downright delicious banana bread you will ever eat!

Did you know that the current most popular at-home baked good is banana bread? I’m not sure why but I’ve never met anyone who doesn’t love banana bread, so that must be the reason!

Of course, a basic banana bread recipe is super quick and easy to make. Alongside sheet pan pancakes, it’s one of the first recipes I ever had my kids help me with.

It’s near impossible to mess up and can be made even more delicious with the addition of chocolate chips.

Looking for a banana nut bread recipe? Just add some chopped walnuts into the batter and you’ve got yourself a winner! In fact, this recipe technically calls for the addition of nuts. But since my 3 year old is allergic, we leave them out. If no one in your family is allergic, I highly recommend adding them…they add great texture and flavor!

But like I said, this is not your mama’s basic banana bread recipe. Oh no, my friend. This has a few extra ingredients added to it that really just give it a leg up over all those other Plain Jane banana breads.

So it’s still a great recipe to whip up first thing in the morning and eat for elevenses, lunch, a late afternoon snack, a before-bedtime snack or even for breakfast the next day 😆

Can you tell I like to eat it any time of the day!?

Table of Contents show
1 The Recipe
2 Can I Make This Recipe with Sour Cream?
3 How to Store Banana Bread
4 World’s Best Ever Banana Bread

I’ve made it seem like there are some mysterious ingredients that go into this recipe. Really, there’s nothing crazy in here at all. The basic ingredients remain the same: all purpose flour, baking soda, very ripe bananas, sugar, eggs and oil. Some other recipes call for butter in place of oil, but the oil works well here so that’s what I’ve stuck to.

The addition of the crème fraîche adds both depth and moistness to the final product. There’s a little touch of vanilla and cinnamon – just enough to add in another slight layer of flavor. I feel like vanilla makes every baked good taste better anyway, right?

Instead of throwing everything into a bowl and mixing them, this recipe calls for whisking the sugar and eggs first. This aerates the batter, which results in a lovely light and airy texture once baked.

You might notice the darker color of this loaf. I like to use coconut sugar in place of regular granulated sugar, but each works equally well. They work one a 1:1 ratio so use whatever you have on hand. Just know if you use cane sugar, the final color will be lighter.

Once the egg and sugar mixture has been mixed for about 5 minutes, the oil will slowly be drizzled in. It’s important to do this slowly, so as not to deflate all the air that was just added to the batter.

The remaining wet ingredients (bananas, crème fraîche and vanilla) then are added while mixing on a low speed. Finally, fold in the flour and baking soda (and optional: nuts) by hand until just incorporated. You want to make sure that the flour is thoroughly mixed so that no streaks are left but not so much that you undo all air that was put into the batter at the beginning stage.

Pour the batter into a buttered 9 x 5 inch loaf pan and bake for 60 minutes or until the top of the banana bread is golden brown and springs back when you poke it in the middle. Allow to cool for at least 30 minutes in the pan before removing.

Can I Make This Recipe with Sour Cream?

You can use sour cream in place of the crème fraîche if you don’t want to go to the store. However, crème fraîche has a higher fat content, is thicker, richer and less tangy than sour cream so it really is the better choice for the perfect banana bread. If you’re really stuck, greek yogurt works, too.

How to Store Banana Bread 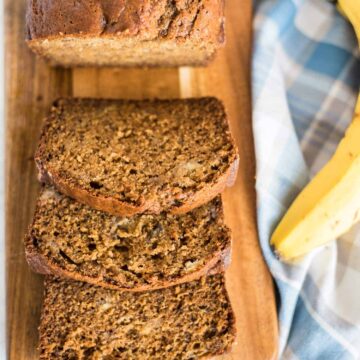 Jenna is a self taught decorator and lover of all things interior design who has helped thousands create a home they love. 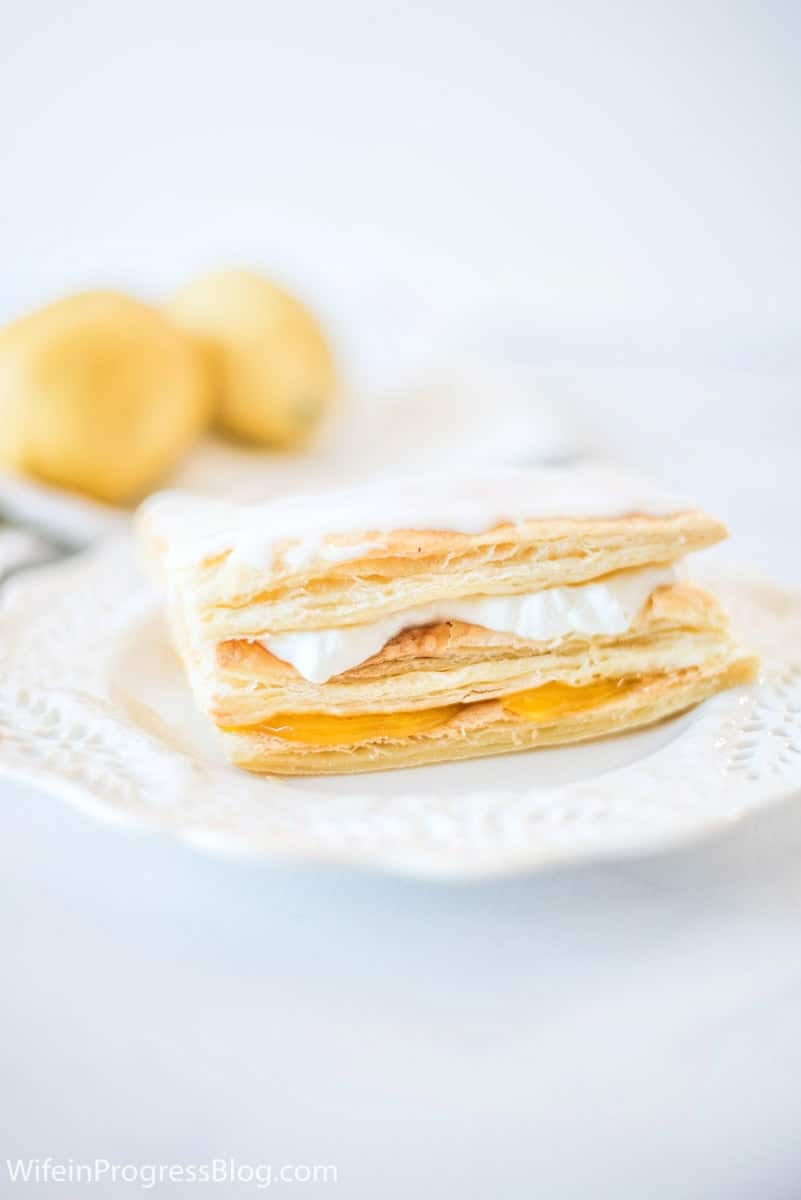 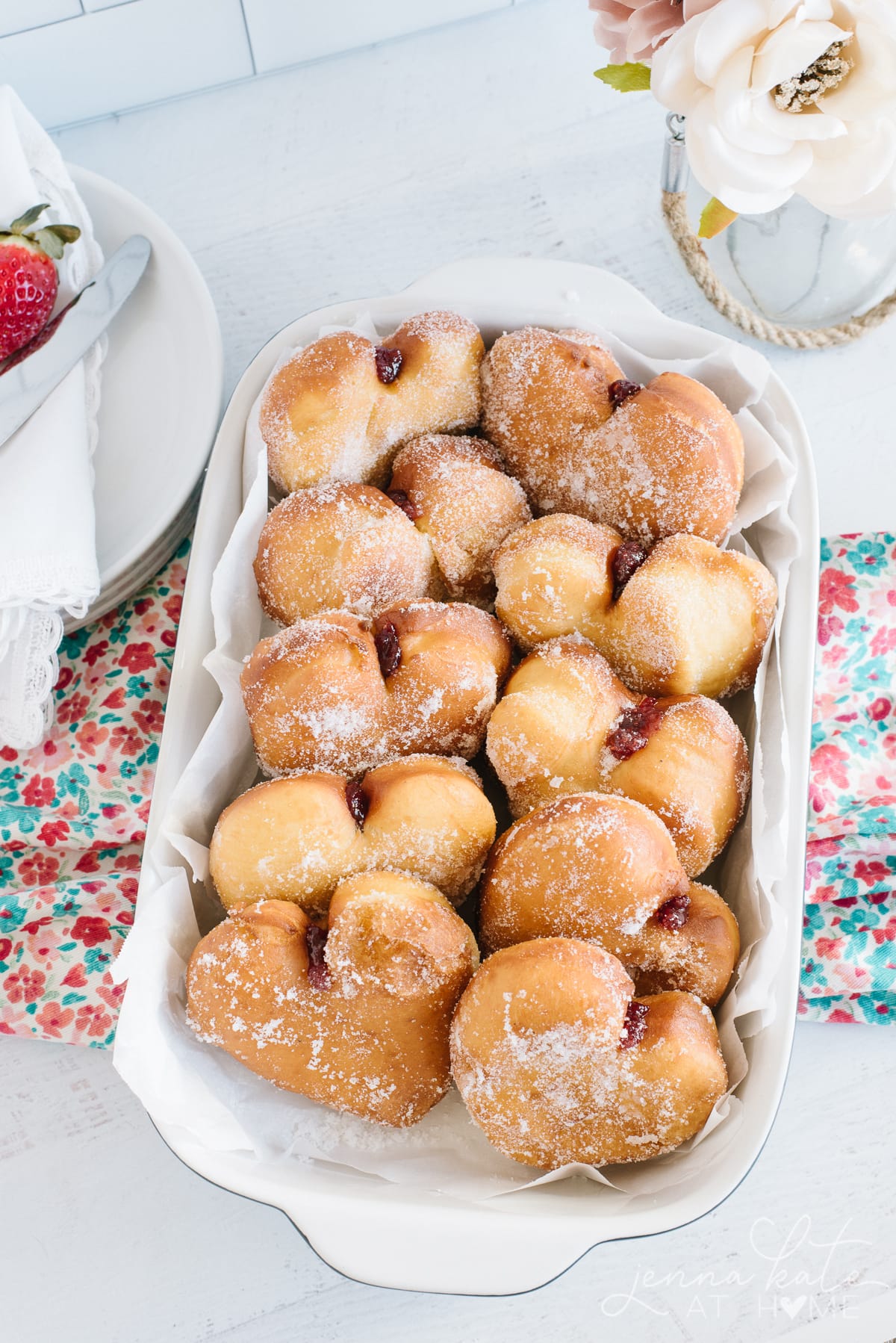 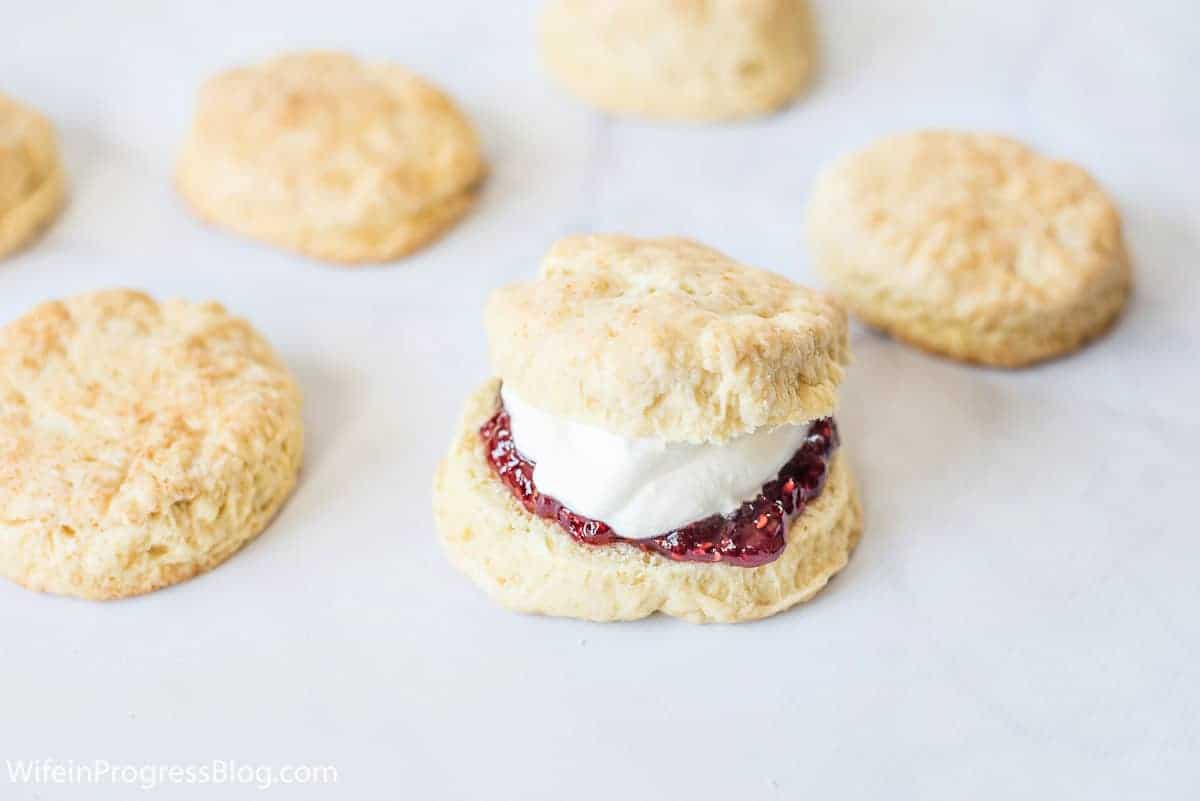 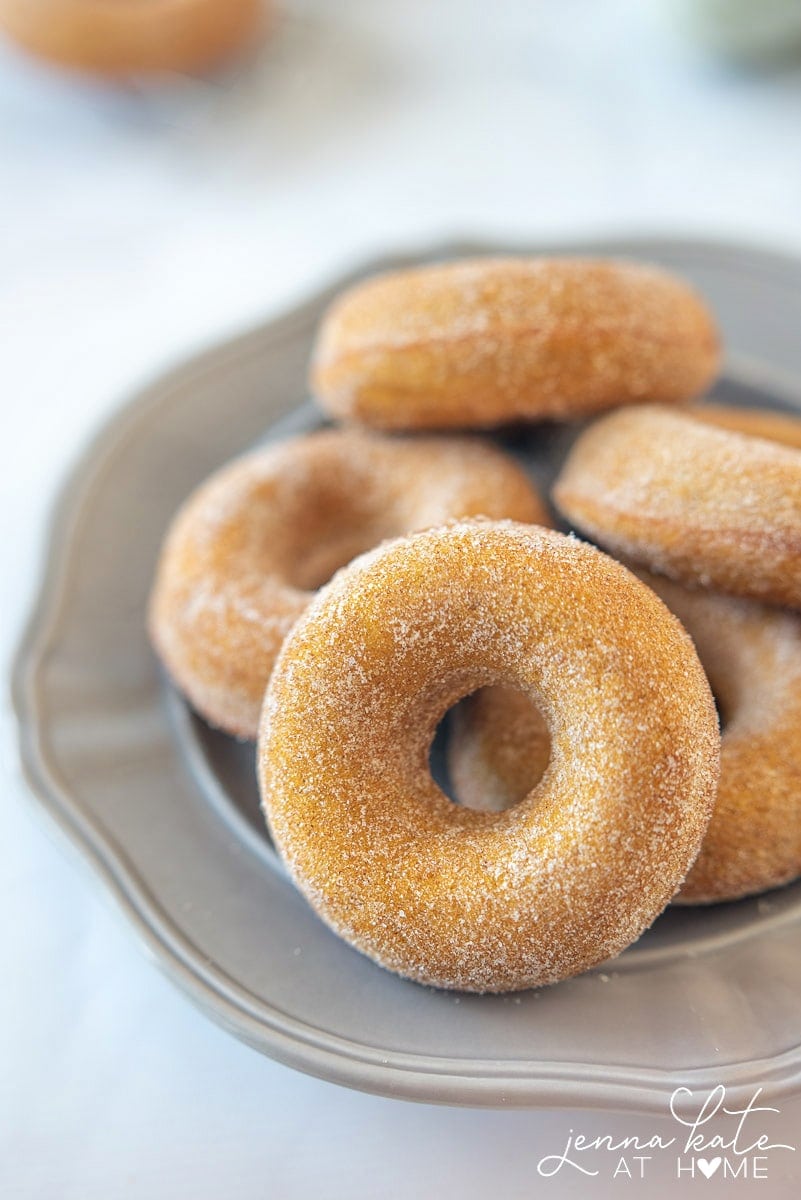 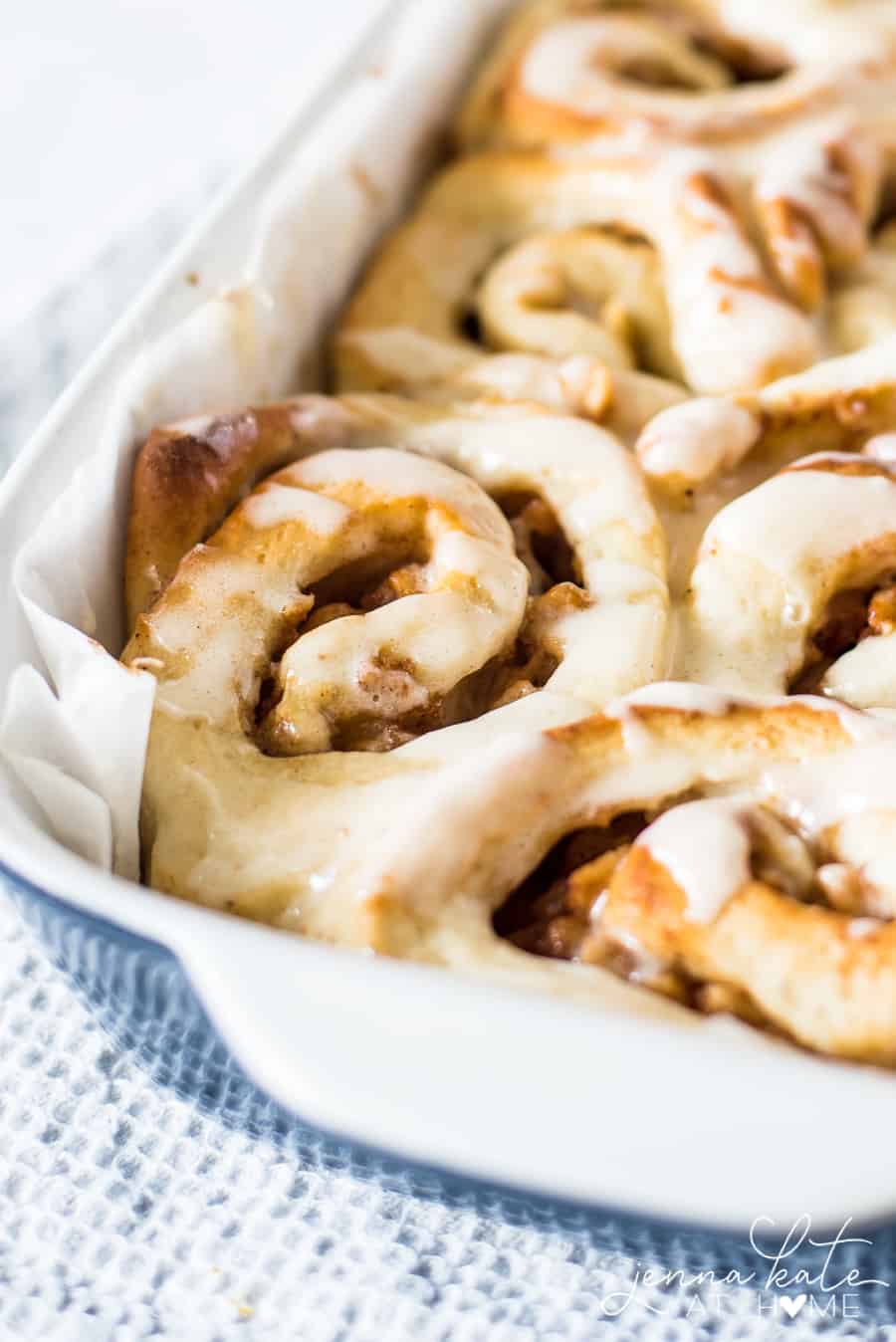 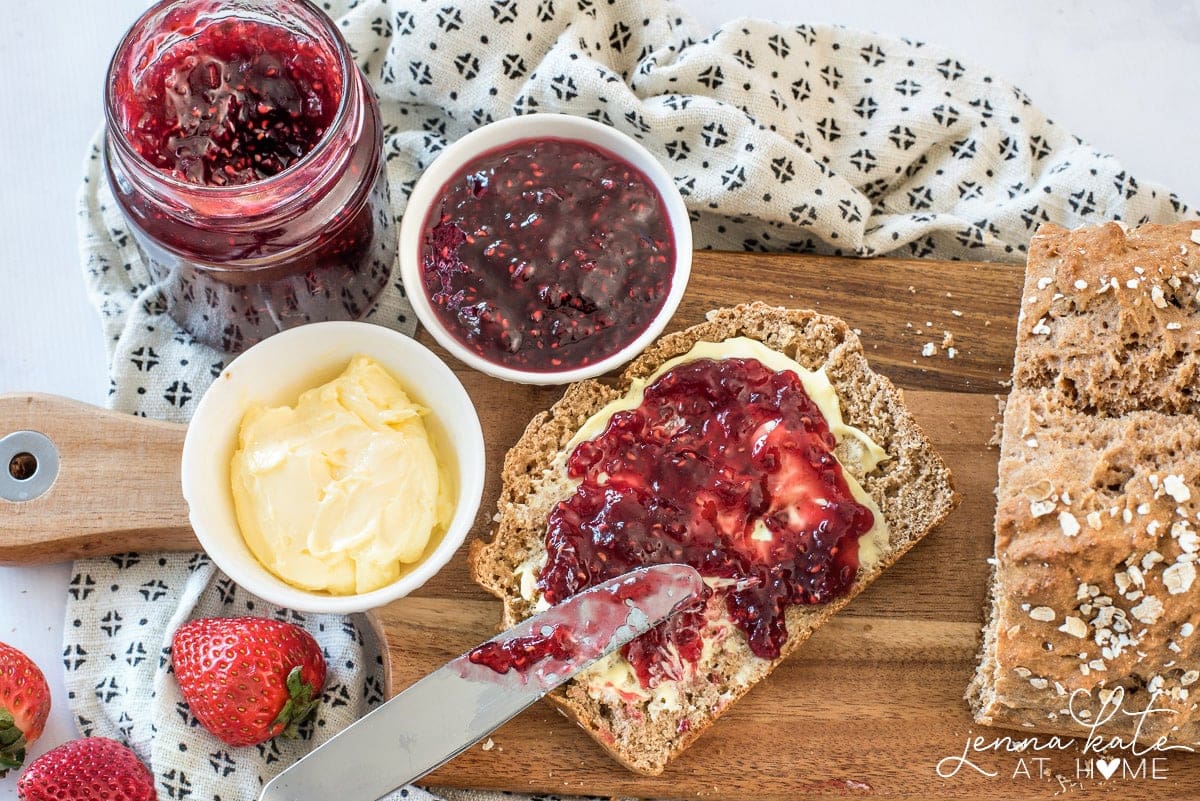 I’m a busy mom of 4 boys, and the author & photographer here at JennaKateatHome.com. My goal is for you and your family to LOVE the home you live in. I’ll show you how to create a home that looks good, feels good, and functions well!